Asthma and Its Treatment with Inhalers

The most popular inhalers brands for coping with bronchospasms are:

Bronchial asthma is a chronic inflammatory disease of the respiratory tract, characterized by attacks of dyspnea, which are often accompanied by coughing and can develop into bronchial attacks. It happens due to the fact that the airways over-react to various stimuli. In response to irritation, they narrow and produce a large amount of mucus, which disrupts the normal flow of air during breathing.

Bronchial asthma occurs in people of all ages, but most often it occurs in children – half of them “outgrow” their bronchial disease. Now more than 300 million people in the world suffer from this disease which number is constantly increasing. 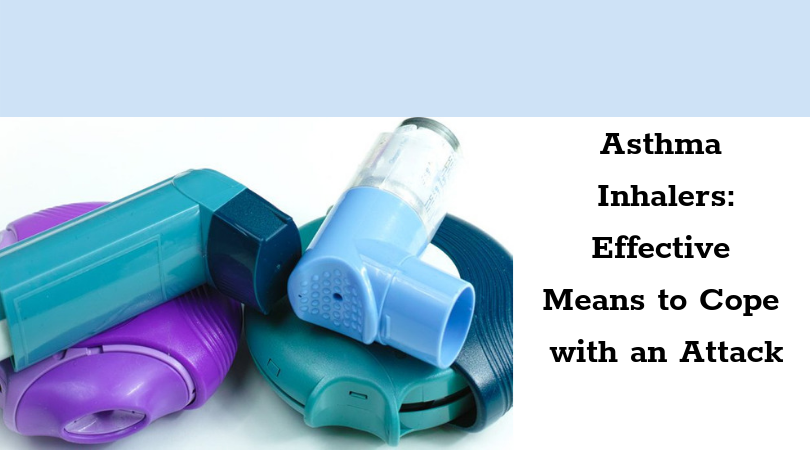 The symptoms of this disease can be different: from a slight difficulty in breathing, wheezing and coughing to shortness of breath, chest tightness and attacks of breathlessness.

When coughing, which is accompanied by wheezing or difficulty breathing, you should consult a doctor. If the diagnosis has already been established, but if you feel the necessity to use the inhaler more often than was prescribed, you should contact your doctor, as well.

If symptoms increase or do not disappear within 24–48 hours, emergency medical care and hospitalization may be required. If the patient begins to suffocate, speech ability is arrested, then you should immediately call an ambulance.

Asthma is caused by hypersensitivity to stimuli. This disease can be associated with both hereditary predisposition and environmental factors (including allergic factors or frequent respiratory tract infections).

An attack can be caused by:

If you have “aspirin-induced asthma,” you should avoid taking acetylsalicylic acid and nonsteroidal anti-inflammatory drugs, especially since this type of illness can be very severe and the seizures occur very quickly.

What is the first aid for a seizure?

It is necessary to help the patient to take the correct position: standing or sitting, to make the elbows apart in order to relax the respiratory muscles. Help the patient to calm down, if he is close to panic, to persuade him to breathe evenly.

With a slight attack, you can help by making a bath for the hands and feet with hot water. If there is no such possibility – actively rub his hands until the ambulance arrives.

How to treat asthma?

This bronchial disease is chronic. If the onset of bronchial asthma took place, it was the very diagnosis that was established and confirmed by research, then supportive therapy is likely to be required periodically to reduce the risk of recurrent attacks and to relieve symptoms. For the treatment of bronchial dysfunctions in adults on the recommendation of the Genetic Information Nondiscrimination Act (GINA), there are several types of drugs.

For supportive treatment of bronchial conditions in adults:

Means for relieving symptoms in adults: apply short-acting bronchodilators. Drugs in this group cause the rapid, through active for a relatively short time, expansion of the respiratory tract, which helps to quickly remove the seizure.

Many anti-asthmtic drugs are strictly prescription drugs, so if you have such a patient in your family, you should always have the right prescription with a valid period, just in case, take it with you on vacation.

Nowadays, many means are used to relieve bronchial attacks. They differ in size, the method of the drug application and the type of this drug.

Their disadvantage is that they are effective only if the patient breathes in simultaneously with the drug release. In addition, there are stationary inhalers, which are uncomfortable to use during attacks, but they are used to prevent them:

How do inhalers work?

Vapor inhalers use only volatile substances, the boiling point of which reaches 100°C, not higher. The most of these compounds are essential oils. Unfortunately, this point significantly narrows the range of compatible drugs used for inhalation. However, this is not the main drawback of steam inhalers, the main thing is the low concentration of the active substance in the produced steam. As a rule, this value is below the required rate for therapeutic effects.

Ultrasonic and compressor inhalers are also known as nebulizers. The word “nebulizer” comes from the Latin language, where nebula means “cloud” or “fog.” These devices form an aerosol from a liquid drug under the influence of ultrasonic waves (ultrasonic nebulizer) or a stream of compressed air that is supplied under high pressure (a compressor or jet nebulizer).

Depending on the brand names of inhalers, you will see the following components in the instruction for use:

Every patient should select the aerosol with a doctor only. Self-medication may bring unfavorable damages to the overall health. In fact, the number of the main ingredients is not limited but choose it correctly for a better result.

For a more convenient treatment of this bronchial condition, multi-component drugs are produced. They contain complexes for basic therapy, for the relief of symptoms, and sometimes the remedies of both groups at the same time. Buy asthma inhalers of a combination type online and cope with 2 main problems: arrest an attack and provide a long-lasting maintenance therapy.

How to clean inhalers

Watch the video of how to clean an inhaler correctly:

Over the counter asthma inhalers

In the majority of cases, all the aerosols for the treatment of this condition are dispensed with a private prescription only. Every patient’s condition should be assessed. The diagnosis should be carefully established. If the diagnosis is confirmed you are welcome to visit either an online pharmacy or conventional drugstore to buy asthma inhalers. Online pharmacies may offer cheap asthma inhalers effective in your exact case. You may consider the best over the counter inhalers under doctor supervision only.